Please click 'Continue' and we will transfer you to the Office of University Development which accepts and facilitates gifts to the university.

Thank you for your support!

Between July 1, 2020, and June 30, 2021, the value of the foundation’s assets grew reaching a total of over $2.6 billion. Expenditures in support of university projects and programs were $155.8 million, an decrease of 13.8 percent compared to the previous fiscal year. Foundation net revenues were $465.3 million. The value of the endowment was $1.69 billion at fiscal year's end.

(Click on a chart to view a larger version) 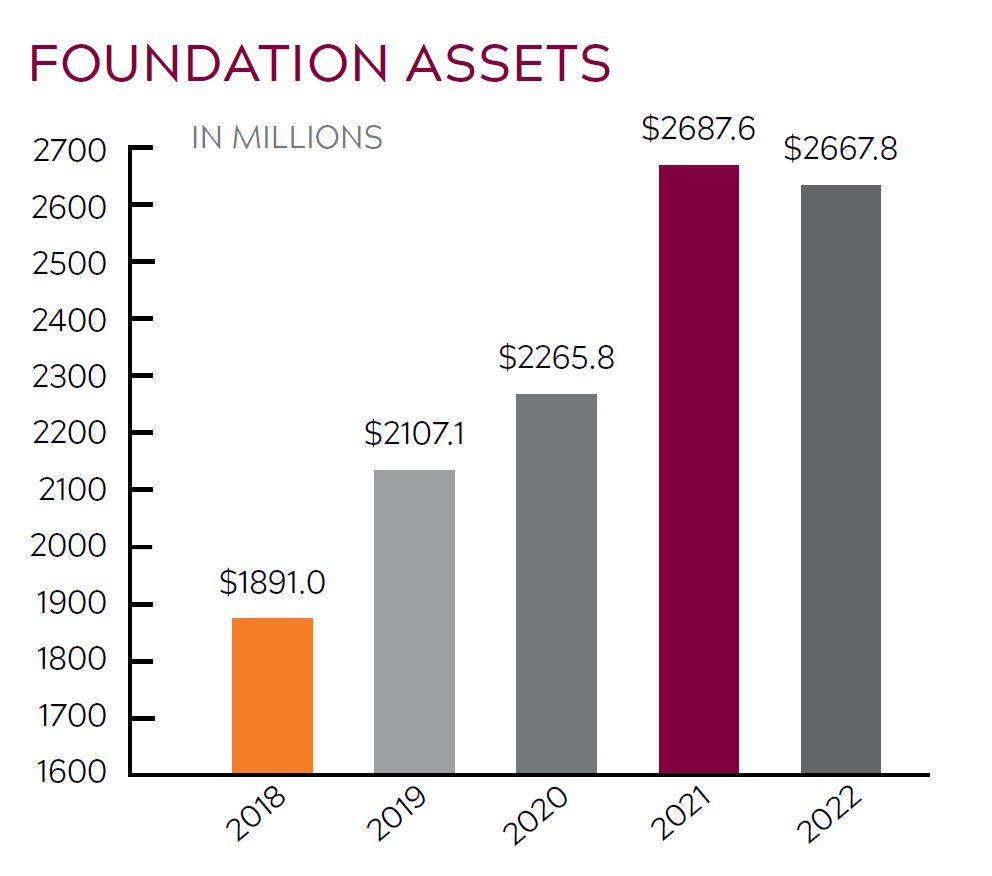 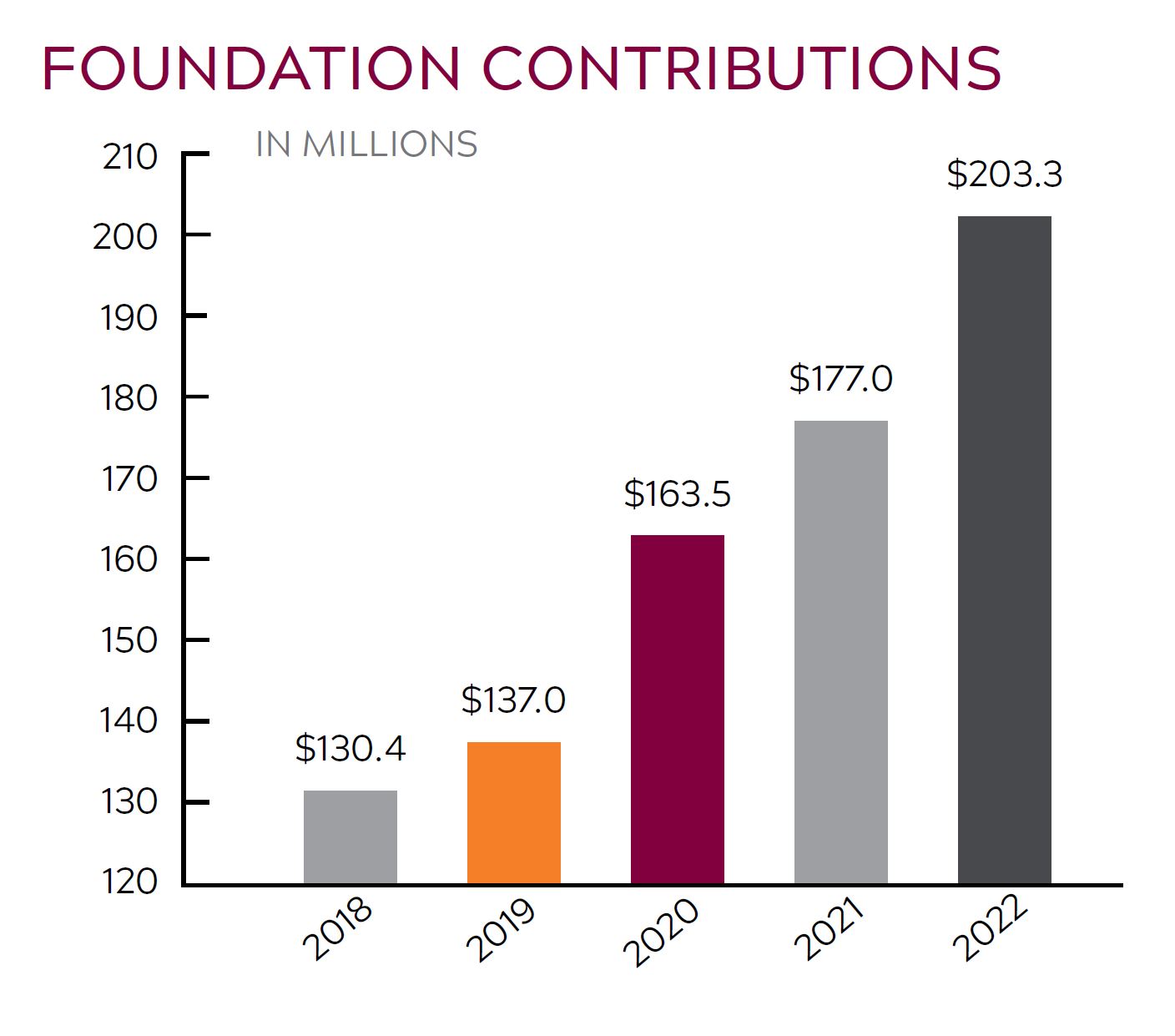 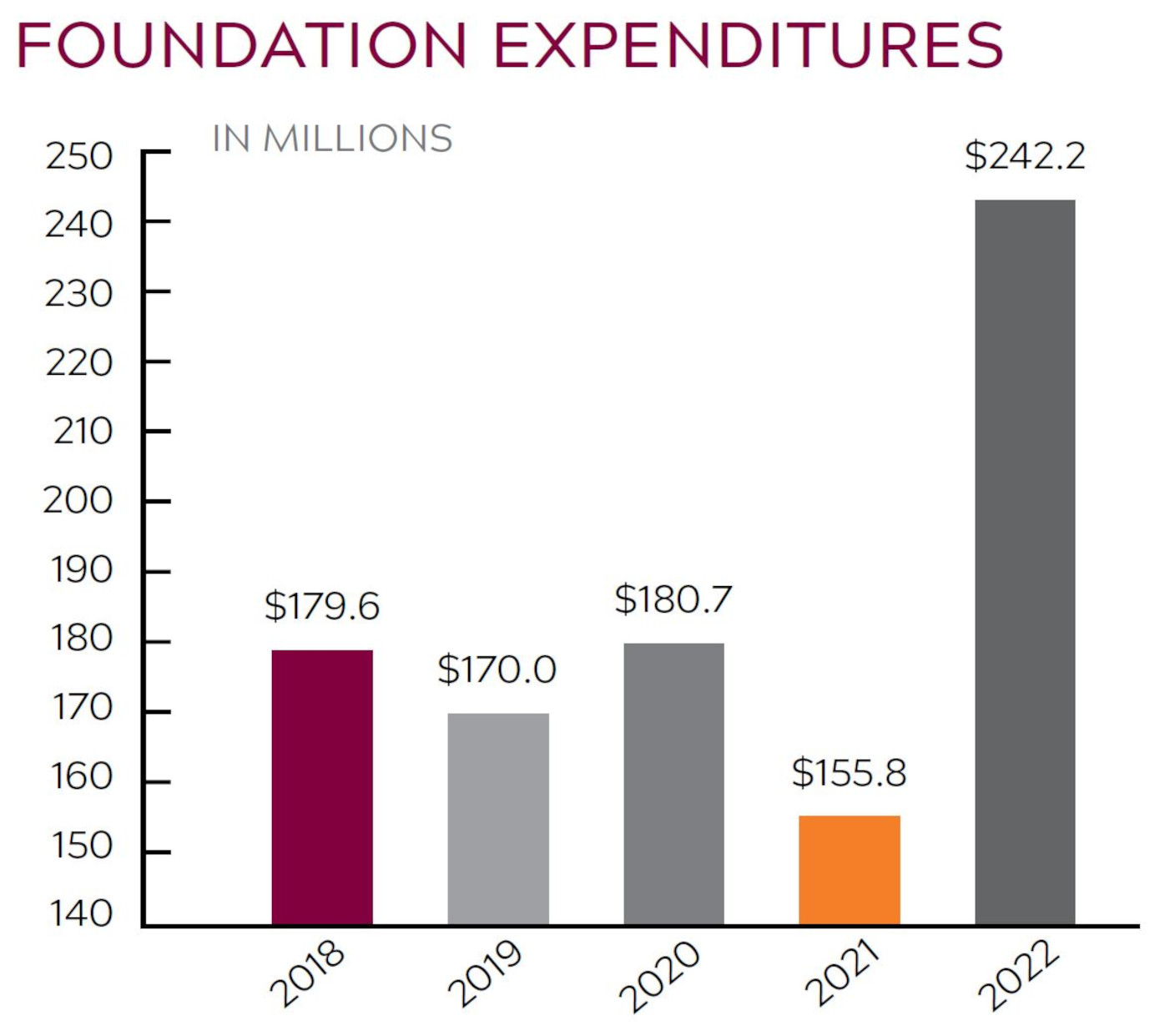 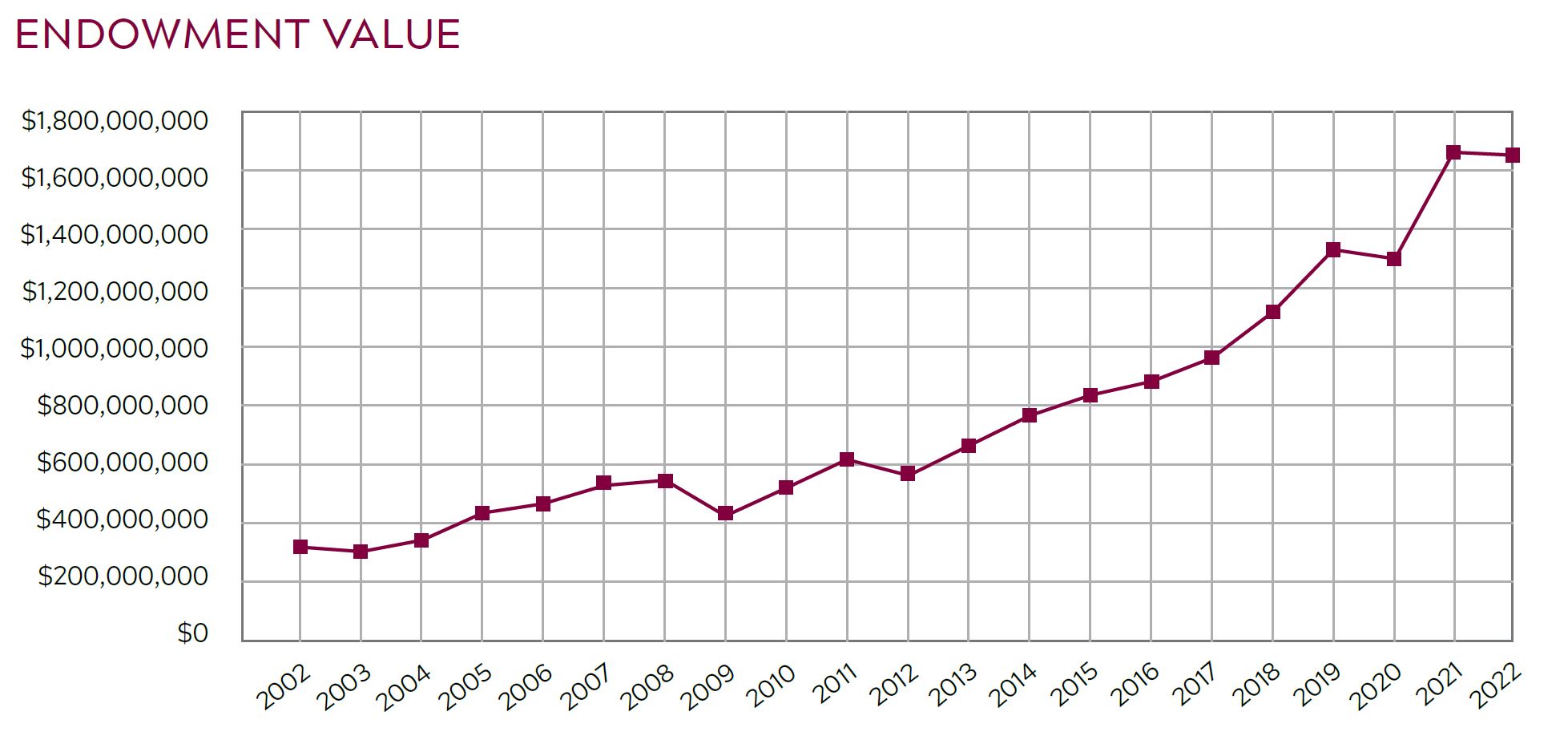 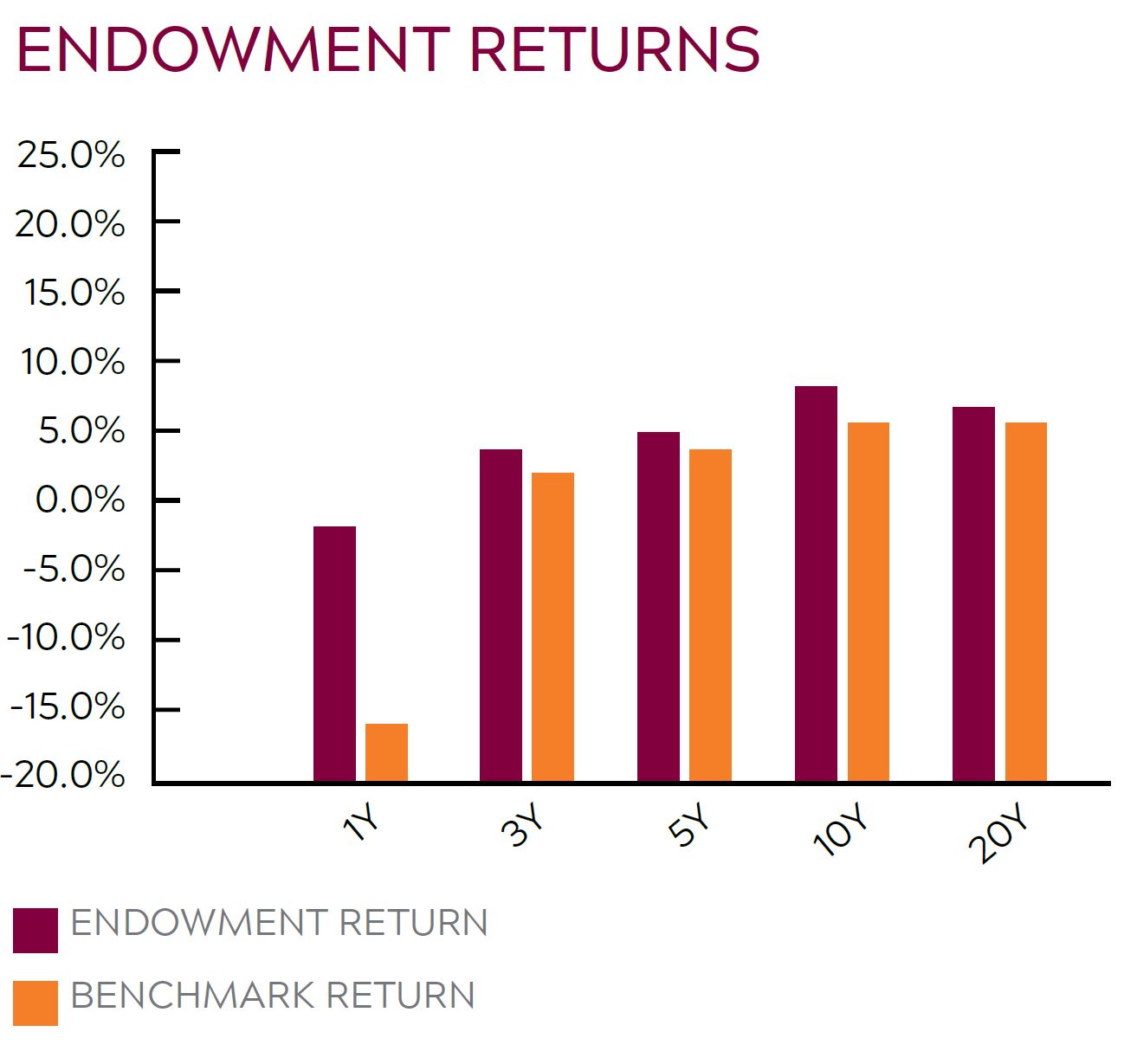 As of June 30, the market value of all endowments held by the Virginia Tech Foundation Inc. totaled $1.69 billion. Of that total, $1.58 billion was invested in the foundation’s consolidated endowment fund, while $106.7 million was held separately in notes, deeds of trust, gift annuities, contributions receivable, real estate partnerships, and other miscellaneous endowed assets.

The June 30 allocation of the foundation’s pooled endowment fund consisted of 62.0 percent global equities, 9.0 percent real assets, and 29.0 percent fixed income. With an investment performance of over 27 percent, it was the highest one-year performance since record-keeping began in 1989.

(Click on the chart to view a larger version)

WVTF journalists have earned recognition from the Society of Professional Journalists, the Radio Television Digital News Association, and the Associated Press for their coverage of local and regional news. Total population coverage now reaches over 2 million listeners, and the weekly listenership estimate at more than 170,000.

Fiscal year 2014-2015 saw the completion of signage renovations and the creation of both a linear park along Gilbert Street and a plaza area between 400 and 460 Turner Street. These pedestrian-friendly enhancements increased the curb appeal of North End, helping its efforts to be an attractive location for shopping, dining, and enjoyment. North End retail occupancy has increased to more than 94 percent.

The popularity of the Pete Dye River Course of Virginia Tech for daily play, special events, and conference/social events continued to expand, and the course continues to be recognized for excellence. Golf Week magazine rated it as the fifth best course in Virginia and The Roanoke Times declared it Best Course in the New River Valley. The River Course hosted more than 60 tournaments—comprising over 2,500 rounds of play, combined. These included high-profile tournaments such as the Hurricane Junior Golf Tour Championship and the College Prep Tour, as well as charity events to benefit organizations including Special Olympics and Wounded Warrior Project.The River Course was selected as the location of the Virginia State Golf Association Amateur Championship for 2016, when it became the first public course to host the event since the championship was initiated in 1904.

Thirty-three years have passed since the Virginia Tech Corporate Research Center began growing businesses that matter, but recent progress indicates that the organization shows no signs of slowing down. More than 3,000 people are employed within the CRC’s 33 buildings in Blacksburg, which, combined, provide more than 1.2 million square feet of space. In Fiscal year 2020, the CRC recognized demand for a co-working space for entrepreneurs, early stage companies, and established companies. The result was COgro, which debuted in October 2019. COgro takes up more than 6,200 square feet within 2200 Kraft Drive. Creatives, designers, and inventors have a variety of leasing options, ranging from reserved or unreserved desks to private offices. COgro offers amenities that are exclusive to its members, along with the other benefits of being at the research park.

In a year of extraordinary challenge for the hospitality industry, the Hotel Roanoke achieved great results in Fiscal year 2020. The hotel maintained its Four Diamond designation from AAA; implemented a new, cloud-based revenue optimization platform developed by Hilton; and was honored by Hilton Worldwide as commercial team of the year for its revenue management. Through February, the hotel’s occupancy rate was over 78 percent, an increase compared to the previous year. The dramatic negative impact of the pandemic on the tourism industry resulted in very limited occupancy rates in March through June, leading to the occupancy rate being down for the hotel’s fiscal year as a whole. But the hotel still outperformed its statewide competitors by having an occupancy rate of just over 59 percent for the year. In March, construction began on a major project to renovate the hotel’s Pine Room Restaurant to expand the hotel’s casual dining options and add a new outdoor dining area and a lobby bar. In April, the hotel celebrated the 25th anniversary of its reopening under Virginia Tech Foundation ownership.

Both WVTF and RADIO IQ, the public radio service the Virginia Tech Foundation provides across the commonwealth, stepped up in response to the pandemic and other critical news events throughout 2019-20. The quality of Radio IQ’s reporting led it to receive a Regional Edward R. Murrow Award and be named Outstanding News Operation of the Virginias for a third straight year by the Virginias Associated Press Broadcasters. News awards were also received from the Public Media Journalists Association and the Society of Professional Journalists. Listeners showed how much they appreciate the radio service by setting a record for donations. Together, they gave over $2.7 million. A major highlight of the year came in January, when broadcasts of flagship National Public Radio programs to the Richmond Metro Area began on 89.7 FM, a powerful new frequency acquired to better serve the state capital and surrounding communities.